Classification of closed cooling tower and how to prevent freezing?

The temperature in winter in North China is usually below zero, so the problem of freezing prevention in the operation of closed cooling tower is increasingly prominent. If the problem is not solved well, the heat exchange tube or other parts of cooling tower may be damaged. According to different process characteristics, some closed cooling towers are operated all day in winter, some are operated in part time, some are almost not used. But we need to consider antifreeze.

If the closed cooling tower does not need to be operated in winter, the spray water and internal circulating water must be drained during shutdown. It is recommended to use compressed air with a pressure of more than 4kg to forcibly drain the internal circulating water, while the carbon steel tube heat exchanger is not recommended to use the way of emptying to prevent freezing.

The antifreeze of internal circulating water system can be added with glycol solution or electric heating equipment. The freezing point of glycol solution should be below the local historical low temperature.

For larger cooling system occasions, it can be considered to dig a pool to put spray water into it, which can save the power consumption cost of electric heating operation, and can also put drugs in the pool to improve the quality of spray water.

If the closed cooling tower is equipped with an electric control system, the number of cooling towers may change due to the load change of the main system, so the problem of antifreeze should also be considered. Unused equipment can be drained before winter to prevent freezing.

With the continuous development of science and technology, closed cooling tower will usher in greater development and application space. 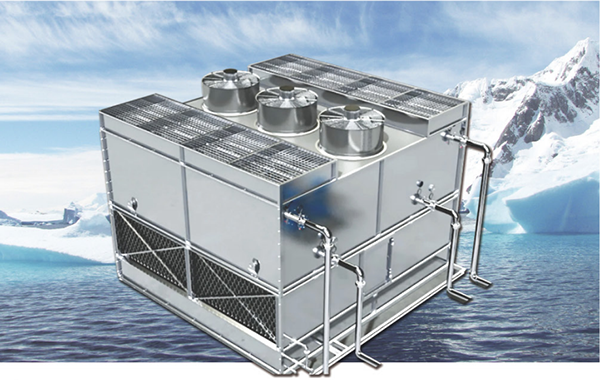